An award-winning photographer, Brian is praised worldwide for his aesthetic sense as well as his journalistic drive for relevance. His uniquely-creative images tell stories that not only celebrate the mystery and beauty of the sea, but also help bring attention to the large number of issues that endanger our oceans and its inhabitants.

Unique within the field of underwater photography is Brian’s ability to pursue subjects of great diversity. His year round assignment schedule frequently finds himself in environments of extreme contrast from tropical coral reefs to diving beneath polar ice. While on assignment he has lived on the bottom of the sea, spent months aboard fishing boats and traveled in everything from snowmobiles to canoes to the Goodyear Blimp to get the picture. He has spent more than 10,000 hours underwater over the last thirty years.

For National Geographic Magazine, Brian has covered a wide range of stories, from the harp seal’s struggle to survive in frozen waters to the alarming decrease in the world’s fisheries, both cover stories. Other NGM features have focused on subjects such as the planet’s last remaining pristine coral reefs, the plight of the right whale, sharks of the Bahamas, marine reserves, sea turtles and squid. He is currently at work on his twentieth feature story for NGM.

Brian frequently lectures on photography and conservation issues having presented at venues such as TED Talks, Harvard University, The National Press Club in Washington, DC, the Royal Geographical Society in London and the Sydney Opera House in Australia. He is also a regular guest on television programs such as NBC’s TODAY Show, CBS Sunday Morning, and ABC’s Good Morning America. .

After three decades of exploring the world’s oceans, Skerry continues to pursue stories that will increase awareness about the sea. “The oceans are in trouble. There are some serious problems out there that I believe are not clear to many people. My hope is to continually find new ways of creating images and stories that both celebrate the sea yet also highlight environmental problems. Photography can be a powerful instrument for change.” 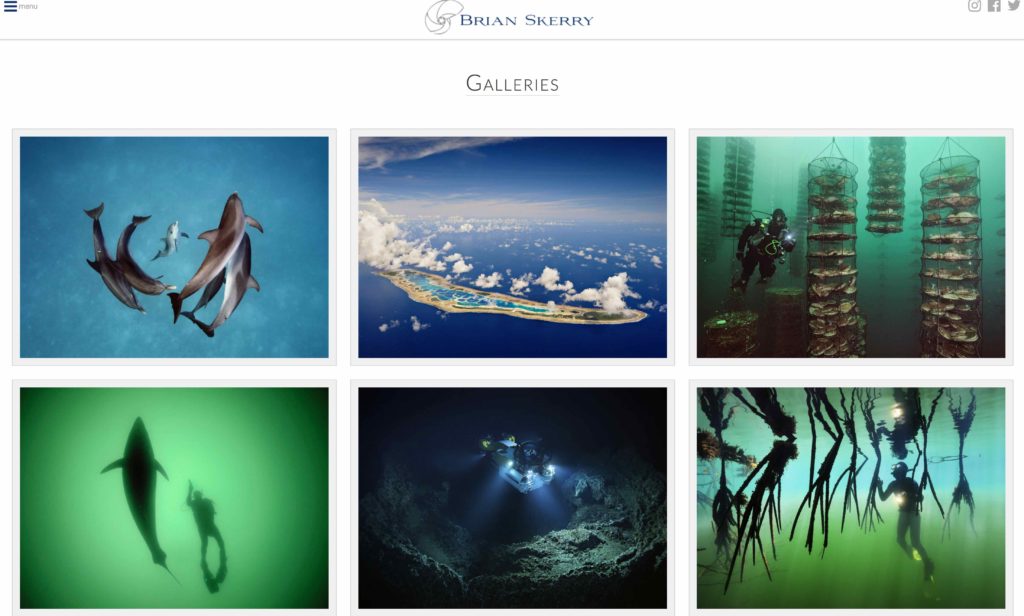 Brian is an 11-time award winner in the prestigious Wildlife Photographer of the Year competition. He has also been recognized with awards from Pictures of the Year International, Nature’s Best, Communication Arts and is the only photographer to win the coveted Peter Benchley Ward for Excellence in Media. In 2010 National Geographic magazine named one of Brian’s images among their 50 Greatest Photographs Of All Time and was awarded the 2016 National Geographic Photographer’s Photographer Award, an honor bestowed by his colleagues.

He has had solo photographer exhibits at Visa Pour l’Image in Perpignan, France as well as cities such as Geneva, Barcelona, Lisbon and Shanghai and at the Smithsonian National Museum of Natural History in Washington, DC.

Brian’s work has also been featured in publications such as Sports Illustrated, The New York Times, BBC Wildlife, Paris Match, GEO, The Washington Post, The Wall Street Journal, Smithsonian, Esquire, Audubon and Men’s Journal. He is the author of 10 books including the acclaimed monograph Ocean Soul. His latest book, SHARK, was released in June 2017.