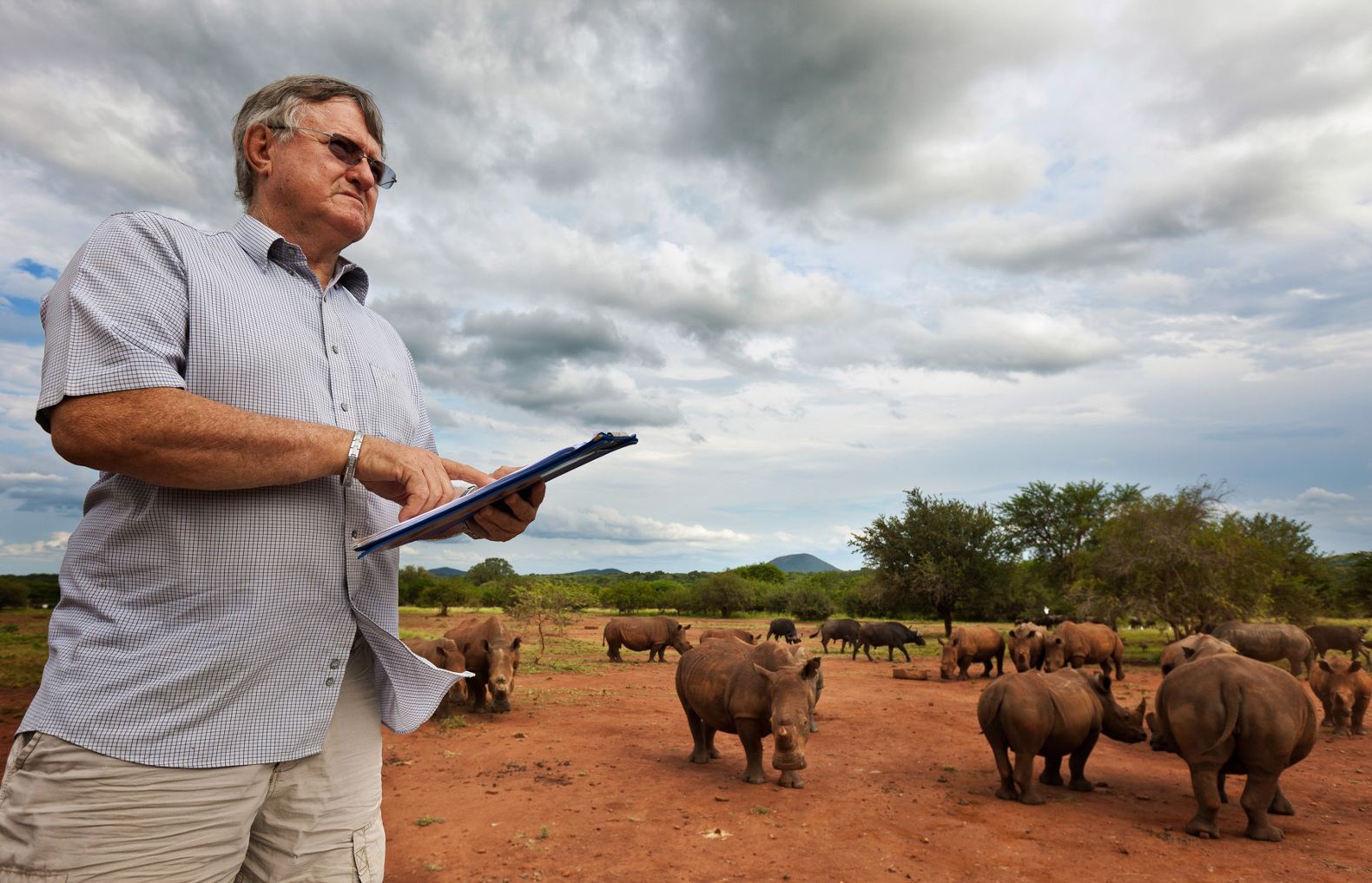 NELSPRUIT, NORTH EAST SOUTH AFRICA, MARCH 2011: The world’s largest White Rhino breeder, John Hume, 69, looks out at a few of his 500 plus White Rhino as they come in from grazing on his 6500 Hectare ranch for a daily snack of lucerne mixed with game pellets, Nelspruit, South Africa, March 19 2011. A self made multi-millionaire, Hume is a controversial character in the conservation world. He advocates a sustainable consumption of rhino horn as a renewable resource as a method to combat the plague of poaching which killed 333 rhino in South Africa in 2010, the highest ever figures and the fastest acceleration of the killing of these unique animals in history. John Hume is adament in his believes that the insatiable Asian demand for Rhino horn and the subsequent illegal slaughter can only be curbed by a sustained, humane harvesting of horn from Rhino kept on large grazing farms by professional farmers for the purposes of commercial conservation. This brings him into direct conflict with much of the conservation world, despite the recent wide-spread popularity of darting and de-horning Rhino across much of South Africa as an anti-poaching deterrent. The rise of the Asian middle class, in particular China and Vietnam, combined with recent clampdowns on permits for legal Rhino hunting, has seen the price of Rhino horn sky-rocket to a level comparable with gold. John Hume has stated that he has well over $25 million worth of Rhino horn which is legally permitted and locked away in bank vaults across South Africa, waiting for a day when he hopes it will be legal to trade. In essence Hume is like a futures trader, gambling millions on the acquisition of White Rhino which he states is both a compassionate gesture and also a great business investment if the law-makers in the conservation world « could only see sense. » Hume believes the Rhino has the resources through which to save itself from the threat of extinction. A fully grown horn can be harvested every 3 years with minimal trauma to the animal, a fact he believes is now born out by the fact that all across South Africa the poaching crisis has seen de-horning become common place without any proven trauma to the animal. It is a well documented case now that if done correctly, the animal recovers very quickly and sustains no injury if the cutting of the horn is done professionally and only at the level of the keratine comprising the horn and not the tissue at the base. There are also less deaths as a result of wounds caused by fighting between animals. Hume sums up his rationale in a few sentences, »We could spend a billion dollars trying to persuade the Asian markets to change their minds about Rhino horn and we will have no effect, you will not change their minds and you certainly won’t change their minds in time to save these creatures. Sustainable utilization of Rhino for their horn is the only solution I can see, if you place this capacity in the hands of capable, professional farmers you will make it sustainable and the rhino will be permanently out of danger. The Chinese and Vietnamese are not going to stop acquiring Rhino horn from any source available, so why don’t we try to sell them horn from live rhino? Why are we forcing this market to kill the rhino in order the buy the horns of the dead animals? » (Photo by Brent Stirton/Reportage for National Geographic Magazine.)