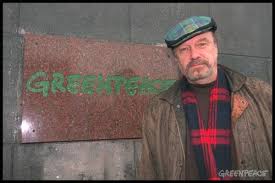 Perhaps more than anyone else, Bob Hunter invented Greenpeace. His death on May 2nd 2005, of cancer, marks the passing of a true original, one of the heroes of the environmental movement.

In 1971, the word "Greenpeace" hadn't yet been coined. Bob was a hippy journalist in Vancouver, a town which he described as having "the biggest concentration of tree-huggers, radicalized students, garbage-dump stoppers, shit-disturbing unionists, freeway fighters, pot smokers and growers, aging Trotskyites, condo killers, farmland savers, fish preservationists, animal rights activists, back-to-the-landers, vegetarians, nudists, Buddhists, and anti-spraying, anti-pollution marchers and picketers in the country, per capita, in the world."

A student of Marshall McLuhan, he was bent on changing the world with what he termed "media mindbombs" -- consciousness-changing sounds and images to blast around the world in the guise of news. He got involved with a few folks in a church basement who wanted to stop a US nuclear weapons test off Amchitka, which he called the "Don't Make a Wave Committee".

Sailing into the bomb

But their plans were going nowhere until Marie Bohlen suggested that the group simply sail a ship into the test site. Bob thought it was a perfect "mindbomb," and on September 15, 1971, he and 11 other rag-tag activists would sail out to challenge the greatest military force on Earth in a rusting fishing boat they called "The Greenpeace." In doing so, they set off a wave of public support and protest which closed the US-Canadian border for the first time since 1812, ultimately shut the testing programme down, and created a new force for environmental and peace activism which continues to this day.

Over the next decade, Bob's madcap creativity, strategic smarts, and hard-nosed journalistic sense of story would indelibly mark the Greenpeace brand of action. From the pack ice of Newfoundland, where he dyed the whitecoats of Harp Seal pups to make them commercially worthless, to the Pacific Ocean where he stood between Russian harpoons and the whales they were hunting, he inspired a new brand of personal environmental activism.

"Bob was a storyteller, a shaman, a word-magician, a Machiavellian mystic, and he dared to inject a sense of humour into the often shrill and sanctimonious job of changing the world," says Greenpeace Executive Director Gerd Leipold. "He was funny and brave and audacious, inspiring in his refusal to accept the limits of the practical or the probable. He revelled in life's ability to deliver little miracles in the form of impossibilities achieved, and Greenpeace will forever bear the mark of his crazy, super-optimistic faith in the wisdom of tilting at windmills."

Warriors of the Rainbow

In 1978, Hunter chronicled the birth of Greenpeace in his book "Warriors of the Rainbow." It was a masterful feat of storytelling, one which attracted a further generation of young people into the ranks of the organisation. In its introduction he wrote:

"We fought... an unequal battle against American and French nuclear weapons makers; Russian, Japanese, and Australian whalers; Norwegian and Canadian seal hunters; multinational oil consortiums and pesticide manufactures; cynical politicians; angry workers; and, again and again, ourselves. The people involved were men and women, young and old, not all of them brave or wise, who found themselves face-to-face with the fullest ecological horrors of the century..."

Among Hunter's stock stories was the tale of how he'd stumbled on to the Cree Indian myth of the "Warriors of the Rainbow" -- a legendary tribe of spirits who would rescue nature when the Earth became sick. The story involved a gypsy dulcimer maker, an old set of fenceposts, and the gift of a book which Hunter claimed leapt into his hands -- quite literally -- when The Greenpeace dropped down a steep swell on its way to Amchitka. The story itself was magical and mythological, and over the years Hunter would embellish and polish it into a hilarious and inspirational piece of campfire folklore.

Hunter was born in Winnipeg, Manitoba in 1941. In his own words "I was an awful, rebellious, early attention-defficient kid who was loved by my art and English teachers, but hated by the rest. I cheated by scribbling novels when I was supposed to be doing schoolwork." He became a journalist for the Winnipeg Tribune and later wrote a column for the Vancouver Sun in which he featured environmental subjects. He quit writing the column when he joined the first Greenpeace voyage to save the whales, becoming a reporter explicitly to ensure his somewhat less than objective "message" would reach a global audience, because "the subjective stuff written by columnists [was] never picked up by the wire services."

He readily confessed that this made him "a traitor to my profession," but believed he had a higher calling: "If we ignore [the] laws of ecology we will continue to be guilty of crimes against the earth. We will not be judged by men for these crimes, but with a justice meeted out by the earth itself. The destruction of the earth will lead, inevitably, to the destruction of ourselves."

Hunter became president of the Greenpeace Foundation in 1973, and served in that post until 1977.

He joined Toronto's City TV as an ecology specialist in 1988, and for years hosted a highly successful morning TV spot for Breakfast TV in his bathrobe, in which he read the day's newspaper headlines and sputtered scandalously witty commentaries in a form of rapid-fire stand-up journalism.

Over the years he continued to contribute to Greenpeace as an advisor and occasional speaker, and kept up good relations with the organisation's original luminaries, including many who were no longer on speaking terms with one other. He authored several books and founded a tongue-in-cheek religion, the Whole Earth Church.

In a recent book, Rex Weyler writes about reflecting with Hunter on their experiences in the early days of Greenpeace:

"The ironies and tension of history simultaneously provided the gift of history: that we got to live, to see the flourishing Earth, the flying fish, dolphins, caribou, seal pups, the raging sea, the blue light of morning, the miracle and terror of survival all rolled into one; and that we were blessed with an opportunity to serve it."

Bob Hunter made much of his opportunity to serve the Earth, and Greenpeace will always be blessed with his spirit.